From the living pharmacy, that is the Amazon rainforests of Brazil and Peru, comes this large woody vine that gets its strange name from the hook-like thorns resembling the claws of a cat.

Ancestors of Peru have used the Cat’s claw as a holistic and noble remedy. It treated various inflammations, rheumatism, stomach ulcers, tumors, dysentery, birth control, arthritis, and enhancement of immune function in patients.

Science has long known the effective action of the plant ingredients on inflammatory processes and the stimulation of metabolism in deeper layers of skin as well as the binding of free radicals in the body. It is intensely beginning to be used since the 1990s for the treatment of Aids and Cancer.

AC-11 has a completely unique chemical composition, unlike any other products that are sold under the Cat’s claw name. Backed by rigorous scientific testing, AC-11 is derived naturally as an organic extract of the bark of the Cat’s claw.

It is patented by purification process standardized to a minimum of 8% Carboxyl Alkyl Esters (CAE) concentration. These CAE are novel biologically active substances that promote the body ability to repair DNA.

AC-11 has also been responsible for the initiation of inflammatory responses by the immune system, allowing for more brain cells to survive from oxidative damage. AC-11 is often used by nootropic enthusiasts for cognitive support.

''After taking this for 3 months I have noticed major improvements in my skin, hair growth and nails. If it’s working this well on the outward physical it must be improving the internal!''
Jodi Sisson
''I have used this ac-11 in the past and its even better today. It detoxes you first, and is amazing for arthritis aches and pains! I have been suffering all winter with ortho pains and now none! I look forward to walking and enjoying life again! I am in my 60s and this cats claw formula is superior to all the rest! I don't know what they did, but the difference is amazing!''
BarbitheK
''Great stuff, glad I was finally able to find "C-Med-100".''
adrian vinson
''The best product of ac-11 out there.''
Amazon Customer

What is DNA damage?
Inside the nucleus of every cell in our body is DNA. The integrity of this DNA is critical to healthy cell replication and function. But every day, we experience up to one million DNA damage incidents from free radicals. The resulting accumulated damage underlies many conditions of aging and disease.

DNA damage and aging
The true cause of aging is the degradation of cell health over time. We can’t see it happening at the cellular level, but we see the symptoms of aging outwardly as sagging skin, age spots, achy joints, mental fog, loss of energy, and a general decrease in quality of life.

DNA damage and disease
Studies have proven that DNA damage accumulating over time leads to chronic conditions of aging, and also diseases such as cancer.

How your body repairs DNA damage?
Your body has anti-oxidants that help to block free radicals from causing DNA damage, but it’s not a perfect system, so damage does occur. Fortunately, your body has enzymes that repair DNA damage as it occurs. But eventually, your body’s DNA repair process cannot keep up with the damage that occurs, so that damage accumulates. This happens as you age, but also if your lifestyle is unhealthy, as in the case of smokers.

Led by award-winning physicians and scientists, Healthycell was founded around commitment to develop the highest quality products that empower people to take control of their own health at the most fundamental level. After years of research, the creators and founders of AC-11 have developed a hot water extraction process based on their own molecular sieving technology, using it to create AC-11, The Ranforest Super Herb. 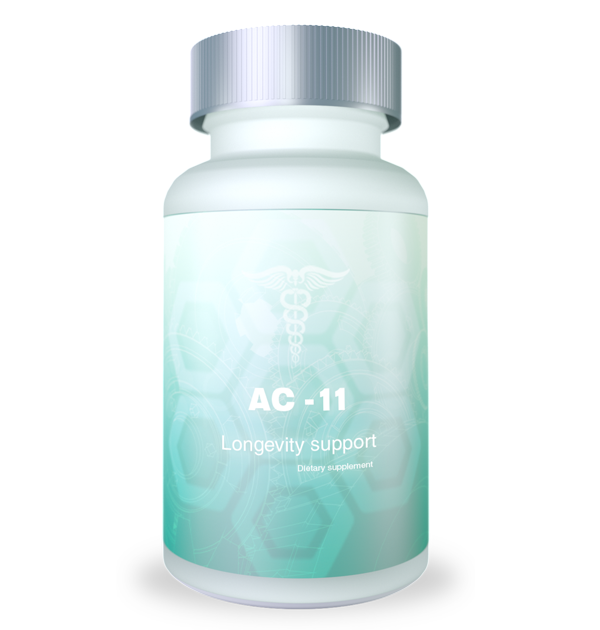