L-theanine is one of those adaptable and many-sided supplements that promote relaxation without causing dullness or diminution of alertness. It is the biologically active constituent of green tea, which has been studied for its great ability to produce a calming effect and prevent over-stimulation.

By upregulating the levels of inhibitory and modulatory neurotransmitters, L-theanine provides general support in the most areas of neurotransmitter imbalance and for any number of neurochemical imbalances. This unique amino acid fits in perfectly with other medicinal herbal preparations as it has a calming yet non-sedative effect.

To aid in feeling relaxed, L-theanine acts on alpha brain waves that stimulate the state of awareness, then balances the optimal levels of dopamine, serotonin, and GABA. Impressively, its mimic of GABA calming effect has proven to reduce restlessness and helps in restful sleep. L-theanine can also have a positive effect on blood pressure and heart health.

By nourishing brain chemistry in that way L-theanine improves cognitive health and general well-being. The studies did not report side effects, even at higher concentrations and longer take-ups. L-theanine is often recommended as a relaxation tool that promote better mental focus.

''I definitely feel the difference. Very good when fasting it takes the edge off.''
David Winslett
''Worked better than expected - definitely helps provide a calming feeling. A great combo with other nootropics.''
Kurt
''Previously, I used Suntheanine and this works just as well if not better. I usually take 1 capsule when I am drinking a lot of caffeinated beverages and then another one when I feel the effects fade. (Caffeine has a longer half-life than L-theanine).''
Perhaps Stressed
''This is an excellent product for relaxation and sleep. I even got one for a coworker and she is finally sleeping through the night for the first time in years. It helps me relax when I'm anxious. ''
Jess P

The scientists have discovered that L-theanine changes levels of amino acids affecting serotonin and other neurotransmitters in the brain. L-Theanine may also help suppress stress hormones that can have a negative effect on mood, memory and learning. L-Theanine may act as a glutamate antagonist and, in turn, balance the harmful effects of high glucocorticoid levels. This also suggests that L-Theanine may be neuroprotective as well.

One Japanese human study concluded that L-Theanine did not induce sleep or make participants sleep longer, but rather that it improved sleep quality. Participants in the study claimed that recovery from exhaustion and feelings of being refreshed were enhanced by L-Theanine. At higher doses of 450-900 mg, one 2018 study suggests it helps people to relax before bedtime and promote restful sleep.

Studies also confirmed that L-theanine supplementation has the ability to reduce mental and physical stress, improve cognition, and boost mood and cognitive performance. One study reported that L-theanine promote alpha wave production in the brain as indicated on an EEG (Electroencephalography). 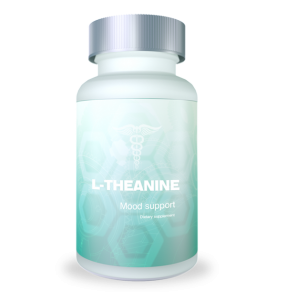